No that’s not the official title for the latest teaser released about Pacific Rim but it could be. We are barbarians and honestly, if we were ever attacked by a hostile alien force of any extraplanetary origin, be it space or dimension, I can totally see a portion of our population going for something like this:

It’s hysterically well done and I love Ron Perlman. He was fantastic in Hellboy and Beauty and the Beast the television series way back when. This is just genius but also a pointed reminder of just how awful we humans can be.

Any invading alien force would face not only unceasing resistance but at some point we will figure out how to commercialize them and then they are in real trouble. Just ask the Western Black Rhino which was officially declared extinct. Hunted to extinction for its horn and a few other bits and pieces for some of the conditions mentioned in this spoof advert for Pacific Rim. 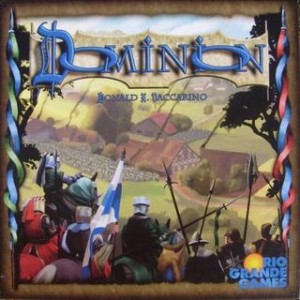 I don’t know that I can do Dominion justice in a review, but I’m going to give it a try. The backstory for the game is that you have inherited a small kingdom and you want to enlarge your holdings by gobbling up surrounding territories held by petty kings and warlords. Each of the other players is in the same position. They want to make their kingdom the largest.

The game mechanics involve cards, lots and lots of cards. Each player starts with a very small, identical deck of cards. Other cards are laid out in sorted piles from which each player may purchase more. There are Action cards, Victory cards, Curse cards and Treasure cards. Those are pretty self-explanatory.

It’s in these cards that the game gets quite complicated. Some of the cards give you points towards winning, Victory cards, and some put you in a better position to get more points, Treasure cards for example. Others restrict what your opponents can do by taking cards away or forcing them to discard, sounds like Curse cards to me.

There are so many variables that it is difficult to carry a single strategy through the game and win with it. Flexibility and the ability to think on your feet are what make for a better chance to win in this game. Don’t loose track of what your opponents are doing either.

For such a complex game it goes fairly quickly. This isn’t like sitting down for a game of Risk that can take hours and hours. Dominion is fast enough to be exciting. Often I find I’m just getting to a place where I think I’m good when suddenly it’s game over.

There are 9 expansions too. Adding any of those into the mix really changes the flavor of the game. I like the Alchemy expansion but Intrigue not so much.

Dominion is distributed by Rio Grande Games and was made by Donald X. Vaccarino. It is recommended for 2 – 4 players ages 13+. I’m pretty sure we’ve played with 5 players at parties and it works out ok. It’s a fun game and good for your Fourth of July entertainment or any gathering. It makes a great gift too. Last but not least there is a Dominion app that is quite fun. K.