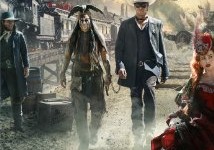 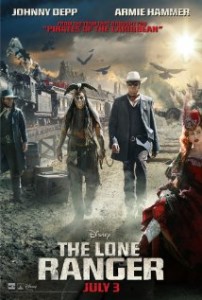 Let’s be honest here. I went into the theatre expecting a “play it safe” middle of the road movie that wouldn’t tax my perceptions or ask anything of me. All I expected was a lightweight summer entertainment movie. I was entertained. I was also pleasantly surprised.

While the basic movie is exactly what one would expect of The Lone Ranger, the writers and directors took it above the midline in several directions consistently throughout the entirety of the movie. The humor was well placed and well paced.

Johnny Depp as Tonto is brilliant and brilliantly witty. Unlike Jack Sparrow, the swashbuckling captain of the Black Pearl in Pirates of the Caribbean, Tonto is actually broken. It would be easy to dismiss Tonto as yet another quirky Depp character but there are significant differences. Jack Sparrow is always three to five steps ahead of everyone else. Tonto is mentally traumatized. Jack Sparrow has an effortlessness about him that makes it clear he’s actually in complete control of himself. Tonto is deliberate, lacking the effervescent nature of Jack Sparrow. Tonto’s wit is dry and understated. As for the Mad Hatter in Alice in Wonderland that character was supposed to be mad and enjoy it. Tonto wasn’t mad.

It’s a good thing that Tonto is funny in this movie because there are some really dark moments and dark themes. There is the horror of what the settlers really did to the native people of America as well as the arrogance and implicit racism of referring to someone whose culture is different as a savage. The film takes this issue head on without beating it to death. I think it was deftly handled and adroitly illustrated.

The Lone Ranger, John Reed, (Armie Hammer) starts out as an almost stereotypical city slicker. He’s educated, genteel and has ideas about how the world should work that are correct in theory but don’t work out so well in practice. His brother Dan Reed (James Badge Dale) is the head Texas Ranger and good hearted while still understanding how things really work. He deputizes his brother as a ranger also.

A love interest (Ruth Wilson), potential love triangle is thrown in because there has to be a girl. This is one of the sub plots I felt the movie could have done without. The hero doesn’t always have to get the girl, and it doesn’t make him gay if he doesn’t—and so what if he was gay? Does it really matter all that much?

With the exception of the love interest, most of the other women in the movie were background extras. There was the train car full of church going women and the towns folk but they were really there as props. Well, except for Madam Red (Helena Bonham Carter) and her working girls. The madam has an ivory prosthetic leg that has a concealed shotgun in it. You know how this went down. Some idiot is sitting in a conference room with a bunch of other men brainstorming for ideas. Finally he says, “Oh! Oh! I got it! Let’s have a whore with a prosthetic leg that’s…wait for it…a SHOTGUN!” And all the other men agree because it’s cool, right? And then, to show what decent guys they are they give her a tragic backstory so she can help the Lone Ranger and Tonto get the bad guy later on in the movie. Actually I kind of liked her. She was spunky and well played.

Ok so there were some flaws. But they did not take over the movie. If the director (Gore Verbinski) and writers had committed to the Lone Ranger rather than hedging their bets with a retrospective type introduction, a few break-in scenes and ending, it would have been a far better movie. It’s a shame they didn’t trust the material. The 1933 fair scenes could have been cut entirely and they never would have been missed. They added nothing to the plot, the emotional connection (such as it was) or the overall story. They felt like an escape clause.

The dynamics between the Lone Ranger, Tonto and Silver are brilliant. Tonto is a world wise soul with a dry wit and a clear sense of what is going on. He also has an innate sense of what motivates people. John Reed, who becomes The Lone Ranger, has clearly led a sheltered life up until this point, is idealistic and determined to make the world conform to his vision of how things should work. Silver, the horse, is clearly the smartest one of the bunch.

John Reed becomes the lone ranger by the sheer fact of surviving an ambush. The main villain, Butch Cavendish (William Fichtner) is probably certifiably insane and viciously mean too. Let’s just say that cannibalism is not something one would expect from the Lone Ranger serial of one’s youth. Thankfully they don’t show it, they just strongly imply it.

Tonto brings up the Windigo legend and it plays well throughout the movie. That a silver bullet is the only thing that can stop the Windigo, for example, is a brilliant explanation for why The Lone Ranger uses silver bullets. It was genius to show Tonto making silver bullets out of the badges of the fallen Texas Rangers. There was emotional power in that concept. I will say that while Tonto’s revelation at the end made sense and hinted at a healing within his broken psyche, dropping the Wendigo legend was kind of a shame. I liked it and they could have gone farther with it.

Themes of corruption in government, betrayal, greed and corporate malfeasance are the backbone of the plot and the forces against which the Lone Ranger and Tonto must stand. Corporate greed and lies lead to a terrible act of genocide in the movie. One of the things that struck me was how close to actual history the movie strayed in some scenes. What happened to the native peoples was an atrocity and this movie does not shy away from that. Nor does it shy away from how the most bigoted people, the cruelest people are sometimes the ones who pay lip service to god the loudest. While I’m sure it was true to history, hearing someone about to commit genocide ask for god’s help was unsettling at best. I doubt god is going to help with something like that.

There is a surprising depth to this film beneath its humor. Also the use of the traditional Lone Ranger theme music was a pleasant surprise. The use of the iconic music was almost a distraction but it played well into the overall tone of the movie.

Overall I found The Lone Ranger to be a decent movie that made no promises it didn’t keep in the end. It stayed internally consistent and while I might quibble with some choices, they did make sense for the characters involved. I would say The Lone Ranger is a delightful movie but not for young children. There are some dark themes and scenes in it. It needed the humor Depp brought to his role as Tonto; otherwise it would have been oppressive.

The Lone Ranger won’t change your life and it’s not the next summer blockbuster but it’s good solid entertainment. K.