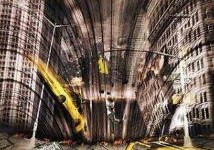 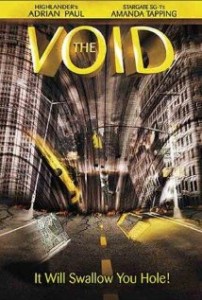 The Void is a third class b-movie. The worst kind: The Booby Trap. Here’s the thing. I selected this movie on Netflix to see what was allegedly a movie about scientists accidentally creating a black hole on Earth. I was looking for disasterpiece theatre. If I want to watch people having sex: I’m over 18, I have access to non-basic cable, I also have access to a credit card and the internet. I would not be looking for a budget sci-fi thriller if I wanted to watch sex.

I don’t like being suckered into watching sex when I want to see special effects about disasters and people finding ways to survive and maybe even saving the day. I find the third class b-movie offensive. Not because there is sex in them but because they lie to me about what the movie is actually about. I got more than half way in and no effects. No bad preliminary test runs of the machine, nothing to indicate the formula is wrong except one person talking about it. No ominous power issues–Nothing. Just sex and an evil corporate villain who is willing to kill to carry on with his experiments, which he now knows will go horribly wrong. Ho hum.

If your plot is so thin and your budget so tight that you have neither concepts nor footage of pending disasters happening, and you are filming a disaster movie, DO NOT PAD YOUR FILM WITH SEX. We, the viewers, are not stupid. We know what you’re doing. We are not amused. Also gratuitous sex will not make a boring movie interesting. It just won’t.

I did not finish watching The Void. I don’t watch Booby Traps. If I want to see humans copulating I can turn on HBO or any number of other channels. Shoot I have Netflix I can chose movies that are at least honest about what most of the time in them is spent on.

In summation: avoid The Void. If you want to watch sex scenes there are far better out there. If you’re looking for a good disaster movie–this is not it. K.

The sequel to In The Flesh, War In Flesh has been on a bit of a writing hiatus while I try to figure out how things go together. A lot of thought and a little bit of inspiration have gotten two major plot points figured out in a way that I am very very pleased with. I was having some real trouble getting things to work out that didn’t seem contrived or forced but finally I figured it out. Two chapters came to me and they contained answers and also another mystery that isn’t revealing itself to me yet. I’m as anxious to find out what’s going on as you will be. Also In The Flesh is available on Amazon, Barnes & Noble, iTunes and Kobo.

Also I saw Huey Lewis and The News at the Zoo. They were awesome, the crowd was great. They did their whole Sports album, seeing how it was the 30th anniversary tour of the Sports album. They also performed some new song and a lot of old favorites. The weather was perfect and the sunset was gorgeous.

I’ll be posting an update about my garden soon. Also I already have tickets for Pacific Rim and will be reviewing it here on M31 Publishing and at The Geek Girl Project. I’m so excited about that movie. Everything I’m seeing from advance reviews says it’ll live up to the hype. Also, good news! I scored an advance readers copy of the novelization of Pacific Rim and I will be reviewing that for The Geek Girl Project and M31. K.