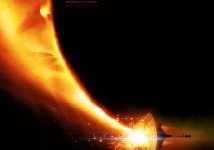 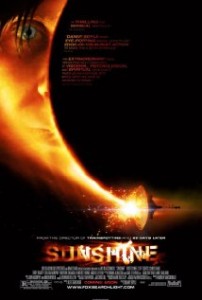 Sure, technically Sunshine is not a low budget movie. I’m including it in this category because despite a bigger budget than most b-movies have, it falls into one of the worst sins a b-movie can commit. No, thankfully it’s not a booby trap; almost as bad though. Follow along and I’ll explain.

The movie premise is that it’s 2050 and the sun has become destabilized by a clump of dark energy and is growing progressively dimmer as a result. The Earth is growing colder, crops are failing, the days are dimer, pretty much the end of the world is upon us. An experimental spacecraft the Icarus was dispatched with a stellar bomb containing nuclear material approximately the size of the island of Manhattan in the hopes of reigniting the core and flushing the dark energy out of our sun.

We don’t pick up with the Icarus but with the second ship the Icarus II, because the Icarus failed and we don’t yet know why. The vast majority of this movie is spent getting to know the crew, their specialties and why each one is so important. The movie does a beautiful job of demonstrating the complexity and technological genus required to build a space ship and get it to function as an enclosed biosphere.

They demonstrate time lag in communications with Earth, so far behind them. They have a brilliant sequence where one of the crewmembers, Mace (Chris Evans), misses out on the very last chance he will have to send a message back to his loved ones because another crewmember, Cappa (Cillian Murphy), talked too long and as close to the sun as they are they can’t wait to send the communication’s packet because if they do it would not make it back to Earth.

They talk about the solar shield and how important it is. The first loss of life comes when the captain and another crewmember have to repair it because a mistake was made recalculating their course when it is decided to divert to see what happened with the Icarus when they discover it nearby.

The Icarus II is carrying the last nuclear material that could be found on Earth. So this is their last chance. And yet they chose to divert to the other ship to see what happened and this is when a great movie becomes a b movie. Instead of staying with the very interesting science they decide to go the slasher movie route. Because, what? Science isn’t interesting enough? Why? And why did the ship’s councilor and medical office suddenly become stupid? I mean we knew he was going insane but did he have to be stupid too?

Was it necessary to kill everyone by slasher before killing everyone by sundive? Seems contrived, forced and frankly a bit redundant. A psychotic killer did not belong in this movie and it was patently obvious that he did not belong. Clearly, whoever threw that in had no idea who the target audience should have been for this movie.

The science fiction movie that Sunshine was mostly comprised of was excellent. It could have been on a par with 2001: A Space Odyssey but no, they couldn’t leave it alone. They had to throw the psychotic killer in there to “spice” it up. All they managed to do was ruin a perfectly good sci-fi movie.

It’s a real shame too because when the ship plunges into the sun there are some fantastic scenes about what it might be like to be so close to moving near the speed of light in an enormous gravity well. Time dilation and theories about what might happen approaching a huge mass like the sun are beautifully portrayed in the final scenes of the movie. It’s a real pity they didn’t trust the material. K.