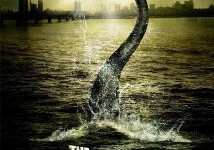 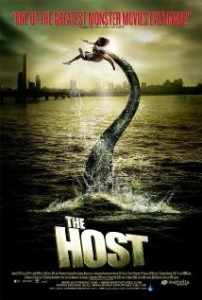 Movie Poster for The Host IMDB

The Host is a monster movie but the monster is not who you might want to think. It opens with a creature, a large, freakish, monstrous creature chowing down on people. One of the triumphs of this, and really most Asian monster movies, is that they capture the effects on a community along with the effects on the individuals. The community is terrorized and one family in particular is at the center of this horror.

A little girl steps out of a riverside shack in time to be chased by the monster who is running down people to eat. Her father, who had tried to distract the monster from eating a stranger, runs by and grabs her hand, dragging her away from the monster. In the chaos he trips, dragging her down with him. You see him grabbing blindly to re-take her hand and drag her away and he gets up and runs with her. Only after the monster has turned back to the river do we see that the child’s hand he grabbed was someone else’s daughter. He sees his daughter carted away by the monster into the river to vanish and he is distraught. This sets up the main conflict of the movie.

We cut to the grandfather, the father and his brother and sister. The brother is a successful businessman and the sister just took a bronze medal in archery. The grandfather is an older man who tries to keep peace in the family because the two successful siblings do not have a great deal of respect for the father of the child. In the midst of their grief they blame him for grabbing the wrong girl’s hand and they literally kick him while he is down writhing in emotional agony.

His siblings call him stupid and there is evidence throughout the film that he is not as mentally sharp as others. Probably why his lively hood is selling snacks out of a little shack on the riverbank. Clearly his more successful siblings disrespect him because he is not as ambitious or successful, as they define it, as they are.

The little girl’s father is their first guinea pig because in trying to distract the creature he got spattered by its blood. While the whole family is in quarantine they get a call on his cell phone from the lost daughter. She is alive and crying for them to help her.

The rest of the movie is this family trying to alternately convince the authorities their daughter is alive and escape the same authorities so they can rescue her. The authorities decide the father is suffering from shock or is delusional when he tells them he got a call from his daughter and they treat him brutally. I could not help but be reminded of how our society treats victims of crime, especially victims of domestic violence. He’s in shock and doesn’t know what he’s saying. He’s delusional and can’t accept that his daughter is dead. He’s mentally ill. He’s crazy is what they decided. Just like so many say of women when they speak out about abuse in the home.

The daughter is hiding in a sewer line where the creature cannot reach her. She has no food and collects drips of water in her hand to drink a drop at a time. The creature is caching bodies in the spill dam to eat later and she cannot climb out. This is the horror of her life and her family knows she is alive but not where she is. They frantically try to find where that cell tower is that took the last call on the father’s cell phone but no one believes them. So they bust out of the medical facility and go in search. The brother and sister continually harangue the father and the grandfather for not being as successful or wealthy as they are.

Finally, driven to the end of his ability to take such cruelty the grandfather admits to a shame he has carried with him all his life. He tells the brother and sister to stop saying cruel things to their brother. “ Stop calling him stupid. Don’t say things like that,” he begs them. What you don’t know is that when he was very young he used to have a spark in him that people could see. Strangers would stop on the road and ask him directions because of it. Then, tragedy struck. The father became an alcoholic and didn’t take care of the boy. He would steal to eat but only because he was so hungry and so neglected. The grandfather starts to weep, “he didn’t get enough calories and something happened to the spark. He didn’t get enough to eat and so you shouldn’t call him names.”

So the judgmentalism and cruelty of the younger brother and sister not only cut deeply their older brother who had an invisible injury but it caused their own father, whom they arguably loved, so much pain that he had to admit to a part of his life that has caused him pain ever since he lived it. All because they had to place blame on someone and assumed they knew enough to do so. That is the real message of this movie. Even in families people don’t know enough to judge someone else and those judgments, made out of arrogance and without compassion cause deep and lasting wounds in those they are directed at and they are often unjust judgments.

We really come face to face with who the monster truly is when the US military doctor in charge of finding the virus takes his Korean counterpart aside. They have recaptured the father of the girl—successfully keeping him from rescuing his terrified daughter, and are about to drill into his head to see if they can find the virus in his cerebral spinal fluid or in the brain itself. In the aside to the Korean counterpart the military doctor admits that there is no virus.

This reveals that the true monster is us. Man’s inhumanity to man is the real horror. Because they know there is no virus and they still cut into the father’s head, without proper anesthetic. They just restrain him and go in with their drill. That is more horrible than any animal doing what nature compels it to do.

But even before they drill into this poor man’s head they first emotionally and mentally torture him in a way that I see every day from people who think nothing of it. First they ask him if his daughter is still alive and they seem like they might even care. There is a moment of hope when you think that maybe someone will listen to him. But they turn it into blaming him for what happened. “Why didn’t you tell someone?” They demand. “Why didn’t you go to the authorities or a news station with this?” They badger him. “Why didn’t you do…” Isn’t that what people who have no compassion say when they want to blame the victim? “Why didn’t you wear something more modest? Why did you walk down that sidewalk after dark?”

The cruelty and self-righteousness of that is breathtaking and in this movie the monstrosity of it is plainly evident. The monsters are not giant creatures that hunt for food; they are the human beings who blame victims for the atrocities committed against them. They are the human beings who think that if they can’t see the injury (say a brain injury or the consequences of starvation) that there is no reason someone can’t do what they, as healthy and privileged people, can do. In The Host there is no virus but there is plenty of cruelty by humans towards humans.

The final but by no means exhaustive, piece of the puzzle is in the end. The US government in conjunction with the Korean government decides that to stop the creature, and thus the spread of the virus (the non-existent virus) they must release a yellow gas that will destroy anything biological that it comes in contact with. The excuse is to stop the monster—the creature, but the reality is that it will turn a large part of the countryside into a wasteland. I could not help but be reminded of Agent Orange (thanks Monsanto), which is still causing birth defects in children to this day in the regions it was used.

They knew there was no virus, they could have killed the creature some other way but they wanted to test their new weapon without being called out on using biological weapons. So they did it. And they murdered protesters who got caught in the cloud. The irony is that the creature shrugged it off. The family, sans the grandfather who was killed by the creature earlier, at long last comes together. They are too late to save the daughter but they save a little boy the girl rescued and they kill the creature.

With the creature gone the governments have no further use for them so their ordeal is over, save for the grieving and we hope, the lessons learned about being more kind and less judgmental. We hope they no longer judge success based upon money, or status but upon the love they have for one another. We hope they no longer look down upon their older brother for being the man he is, because he is being the best man he can be. We hope they learned not to make assumptions, the cruelest and most unfavorable assumptions about people they don’t know, or even people they do know because no one knows everything about another person. The messages in The Host make it one of the best movies I’ve ever watched. The vehicle, of the monster movie, makes it all the more memorable. K. 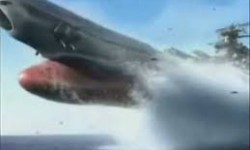 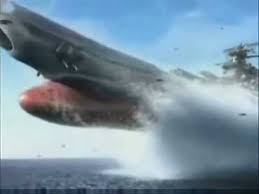 This is so totally awesome! IMDB has the listing for Space Battleship Yamato (2010).

Check out this Teaser Trailer:

Earth has been ravaged by alien attack, leaving the surface contaminated with deadly radiation. The remnants of humanity have fled deep underground. Then hope comes in the form of a capsule from a planet called Iskandar. A device exists that can decontaminate the Earth’s surface. The United Nations of Space Administration rebuilds the Battleship Yamato with a new wave motion engine to make the arduous journey.

With Christmas fast upon us I can’t think of a better stocking stuffer for any StarBlazers fan in your circle of friends or family. 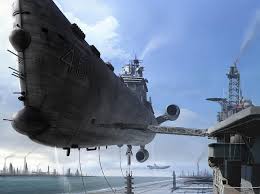 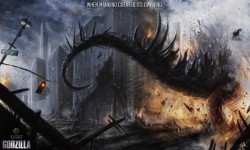 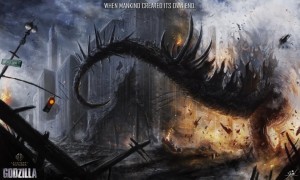 Yes, gentle reader, the San Deigo Comic con Godzilla trailer found its way way to the internet earlier today and Warner Brothers and their affiliates have spent the better part of the day chasing after it and scrubbing it off the internet. I actually did see it while it was up and let me say, it is spectacular. If you ask me they should have left it and run with it. I’ll keep you updated gentle reader.