Godzilla vs. Megalon A Surprising Success 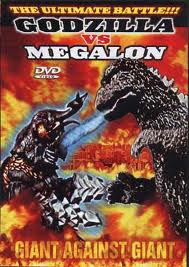 1973 brings us the next movie in the Godzilla franchise: Godzilla vs. Megalon. In every way this was superior to the previous two Godzilla movies and while it is tempting to pan it as an awful movie I think that misses the intent of this movie. In the late sixties campy movies and television shows became extremely popular in the US and Ishiro Honda began experimenting with humor in Godzilla movies. I don’t know, nor do I expect there is a correlation, just that these two things are known facts. Jun Fukuda picked up where Ishiro Honda left off and continued with the Godzilla franchise, including experimenting with humor it seems.

The movie starts out ominously enough for the viewer with questionable music and an opening scene of a young boy on some kind of carnival type watercraft out in a small, narrow bay. An earthquake occurs and the young boy and his craft almost get sucked into a whirlpool. He is rescued by the two men and, in an island nation where tsunamis are commonplace; they stay to watch all of the water get drained out of the bay. Not a promising start, gentle reader.

I’m going to attempt to pull out all of the good things about this movie with the understanding that I’m making it sound far better than it is. Just understand that the cheesiness and the campiness are very over the top in this movie.

The plot of Godzilla vs. Megalon involves such Godzilla staples as aliens, peoples from a lost civilization and war against humankind. In a somewhat thoughtful and easily overlooked twist, the attack on humanity is predicated by an attack by humanity on the other civilization. Granted an unknowing attack but still a real attack.

The testing of nuclear weapons has caused great destruction and even though governments have attempted to test where humans would not be affected, the sad truth of the matter is that fallout drifts. In Godzilla vs. Megalon it is a test of a nuclear device that destroys much of a long hidden and ancient civilization living underground.

Outraged by the unprovoked attack on their civilization the people of Seatopia (yeah our first real laugh) call upon the defender of their people, Megalon to wage terrible war on the surface dwellers. Megalon is called for both vengeance and to be a final weapon, destroying those who would attack the peaceful people of Seatopia.

Since most of their population was killed, murdered, in the blast from the nuclear bomb, they also send operatives to fetch an android being developed by a brilliant scientist and his wealthy benefactor. The same three yahoos we saw in the opening scene. The addition of a young boy to this odd couple living in their mansion is an unfortunate misstep. Not because there is anything inherently wrong with two men providing guidance or fatherly figures for a young boy but because young children do not belong in monster movies (with notable exceptions). In case you haven’t noticed, gentle reader, I feel about young children in monster movies the way most Star Wars fans feel about Jar-Jar Binks—and for the same reason.
The robot is named Jet Jaguar (yet another source of humor) and the Seatopia operatives steal his control device. A car chase scene worthy of Herbi the Love Bug ensues as the wealthy benefactor, who likes cars and drives like a racer (reminding me of no one so much as Tony Stark but 70’s Japanese version—yeah it’s as funny as it sounds). There is some brief lip service given to programming for the robot that is completely thrown out the window as the movie progresses. We go from, “I programmed him that way,” to “His survival programming must have taken over,” to “He must think his job is done;” all but admitting, “I have no idea how he’s doing that.”

This movie doesn’t even give a nod to anything that even remotely resembles the laws of physics. Megalon has wings, as a giant insect type Kaiju, but flies via jet propulsion. And then Megalon bounces, huge, goofy bounces, across the countryside. Jet Jaguar grows and shrinks at will. Somehow the Seatopia (yeah I cringe every time I type that. But what can I do? They named it.) Operatives use Jet Jaguar to guide Megalon.

Our heroes and the obnoxious kid get control of Jet Jaguar back and send him to fetch Godzilla to save Tokyo. Apparently Godzilla makes house calls these days. Jet Jaguar heads back to engage Megalon while the Seatopian big Kahuna calls on alien friends to send—Gigan!

Jet Jaguar has plenty of time to be beat up while Godzilla swims all the way from Monster Island to Japan. Megalon and Gigan are miming their plans and taunts as well as victories as they maul Jet Jaguar. Godzilla finally makes an appearance and his miming says “Game ON!” It’s pretty funny. This really kicks off the main part of the exciting final battle of the movie and it is choreographed for maximum silliness. It has to be, because otherwise it’s just mind bogglingly ridiculous.

Godzilla vs. Megalon is hysterically funny. When I viewed it for this review those watching it with me were laughing out loud during the climactic final battle of the movie. It is such an unlikely venue for humor that I was tempted to write it off as unintentionally funny but knowing the above about the time and intents of Ishiro Honda and upon considering the exaggerated pantomiming motions of the monsters I suspect this was the intent. I think this is the Godzilla movie where they got humor just right.

My advice is to pop up some popcorn, have a martini or a beer and just realize that Godzilla vs. Megalon is what it is. A somewhat funny monster movie that raises some surprisingly astute questions about our actions as a species and the responsibility we hold for damaging our world and those creatures with whom we share it. K

I've been an author all of my life, I just didn't realize it until the Great Recession and I got laid off. With no job on the horizon and a need to keep myself engaged in something productive I began to seriously write. Oh, I've always written. I've written in secret. I've written fan fiction. I've written when I was too embarrassed to let anyone else, save my long-suffering sister see it. All that and it never occurred to me I was a writer until circumstances forced me to try my hand at self publishing. Sometimes it is funny how the universe has to show you what is right under your nose.
View all posts by K. L. Zolnoski →
Tagged Aliens, Gigan, Godzilla, Godzilla vs. Megalon, Jar-Jar, Jet Jaguar, Lost Civilization, Megalon, Seatopia, Star Wars. Bookmark the permalink.