Godzilla vs Mechagodzilla (1974) Not Bad But Not Great Either 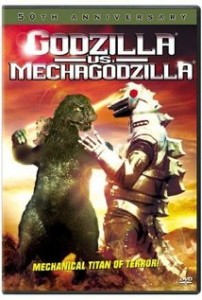 In 1974 Godzilla vs. Mechagodzilla became the fourteenth installment in the Godzilla franchise. This movie had four writers and you can tell. There were easily four different plot lines woven together with varying amounts of success. There was an alien plot line woven in with a secret agent plot line mixed merrily with a legend about a royal family that involves a princess and a prophecy and a scientist whose daughter is held hostage by the aliens. Oh and the giant robot, let us not forget that.

I find it interesting that in this particular Godzilla movie there seems to be a real attempt to create a James Bond type character out of a shadowy Interpol agent. James Bond was created in 1953 by writer Ian Flemming which makes that venerable character just a year older than Godzilla who debuted in 1954.

In Godzilla vs. Mechagodzilla aliens have hatched an evil plan to take over the Earth (why?) by convincing the human population that Godzilla has gone rogue and is wantonly destroying the countryside. It turns out that it’s a huge frame job as the Godzilla we see beating up on his friend Anguirus is actually a robot in disguise! That’s right, Mechagodzilla gets caught wearing a Godzilla suit.

Once the jig is up and everyone knows it’s aliens then we have the battle with Godzilla and King Cesar against Mechagodzilla and King Ghidorah. There’s a lot of plot getting in the way of the action and in this movie the special effects and make-up team get a lot of mileage out of some gorilla suit heads that are painted green. It’s a bit silly but not on the level of say Godzilla vs Gigan.

In a movie full of strange things loosely tied together perhaps the strangest in my opinion is the need for a human scientist to repair Mechagodzilla. Aliens are remote controlling their own super high tech robot Godzilla and it gets damaged by Godzilla in battle. Rather than fix it themselves they kidnap a human scientist and threaten to kill his daughter if he doesn’t affect repairs. I guess that was their excuse for getting human operatives, especially our secret agent from Interpol, into the heart of the alien command center.

After the previous few Godzilla movies Godzilla vs. Mechagodzilla is a nice call back to some of the classics like Destroy All Monsters. It’s not bad but it’s not all that great either. K.

I've been an author all of my life, I just didn't realize it until the Great Recession and I got laid off. With no job on the horizon and a need to keep myself engaged in something productive I began to seriously write. Oh, I've always written. I've written in secret. I've written fan fiction. I've written when I was too embarrassed to let anyone else, save my long-suffering sister see it. All that and it never occurred to me I was a writer until circumstances forced me to try my hand at self publishing. Sometimes it is funny how the universe has to show you what is right under your nose.
View all posts by K. L. Zolnoski →
Tagged Anguirus, Godzilla, Godzilla vs. Mechagodzilla, James Bond, King Cesar, King Ghidorah. Bookmark the permalink.