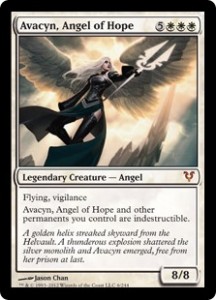 Last time I wrote about my Fallen Angel deck, now named Rakdos. I seem to recall that I promised I’d write up my Angel deck, now called Azorius (Blue and White). This is my slowest deck. The mana threshold went up from 5 to 7 when I rebuilt it and there is very little acceleration to be found playing Blue or White. I also didn’t want to dilute the deck by putting too many counter spell type cards in it. I had to use some countering abilities though, since I cannot speed up the deck, my only hope is to slow down my opponents.

The real crux of my Azorius deck is that if I don’t miss a land drop and don’t get defeated before turns 5 to 7 I can and will cast a large flying creature every single turn after I hit the peak of my mana curve. It’s a dicey strategy since a lot of decks, even casual ones, if they get a good opening hand, can take me down before my deck gets going. If I, somehow, manage to survive though, the angels are amazing. 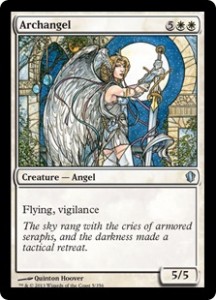 I’ve tried to select angels that multi-task. Gone completely are the classic Serra Angels of yore that used to be the backbone of the deck. Gone too are the Archangels that used to be my big closers. Now I have Akroma, Angel of Wrath and Avacyn, Angel of Hope among others. It was a difficult choice to remove the Serra Angels and Archangels but the deck is slow, I need for the Angels I play to give me bonuses of some kind. 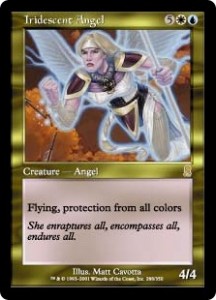 Of the Angels I have in the deck the two that seem to cause the greatest gnashing of teeth and wailing from my foes are the Iridescent Angel and Reya Dawnbringer. The Iridescent Angel has protection (pro) from every color and Reya Dawnbringer allows me to return target creature card from my graveyard to play during my upkeep. I find them quite useful.

One of the other things I look for in cards and in a deck is that it is pretty. There is enough Magic: The Gathering art out there, and variant art for individual cards that I can usually find something I like or that fits with the visual theme of the deck as I build it. My Azorius deck is the most beautiful deck I’ve ever been able to put together. With a very few, notable and very practical exceptions, every card is simply gorgeous. Yes art matters.

There are still some angels I would like to get for this deck and a few cards I’m not too certain about keeping in there. This deck, of all my decks, is my favorite, it contains the remnants of the first deck I ever made and it is the one that I’m most particular about. Unlike my Rakdos deck or my Orzhov deck it is not quite right yet, it doesn’t have quite the right feel to it. 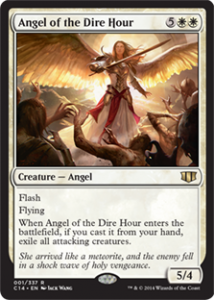 Angel of the Dire Hour

Here is the current breakdown for my Azorius deck:

1 Seraph of Dawn
1 Platinum Angel
1 Battlegrace Angel
1 Linvala, Keeper of Silence (new addition)
1 Angel of the Dire Hour
1 Akroma, Angel of Wrath
1 Avacyn, Angel of Hope
1 Iona, Shield of Emeria
1 Angel of Salvation
1 Angel of Jubilation
1 Angel of Serenity
1 Reya Dawnbringer
1 Shepherd of the Lost
2 Sunblast Angel
2 Archangel of Thune
2 Serra Avenger
2 Lightkeeper of Emeria
3 Iridescent Angel
2 Wall of Omens (cheap and card drawing but I’m iffy about these in the deck)
1 Noble Stand
1 Moat
1 Concentrate
1 Timely Reinforcements (iffy)
1 Remember the Fallen
1 Iona’s Judgment
2 Dismiss
1 Erase
1 Cyclonic Rift (so useful but I resist it in this deck)
1 Comeuppance (useful but kind of ugly)
1 Sphinx’s Revelation (not right for this deck but card drawing is so good)
1 Return to Dust
1 Loreseeker’s Stone (iffy)
1 Sol Ring
2 Pearl Medallion
1 Elixir of Immortality (Doesn’t seem right for the deck)
1 Maze of Ith
1 Seraph Sanctuary
1 Prahv, Spires of Order
1 Emeria, the Sky Ruin
2 Azorius Guildgate (we have a name, folks)
2 Glacial Fortress
4 Tundra (Did I mention the remnants of my first ever deck?)
2 Island
18 plains

Whew! That’s quite a list to type up. I’m currently looking to pick up some other angels to swap out for some of the questionable stuff, like a Baneslayer Angel. I really like this deck but it is not the fastest deck to play, it’s really more of a style thing and it does need some improvement. I’m very happy that there are so many angels to choose from that I can really make something close to competitive using angels.

Next time I think I’ll write up my Orzhov deck, which is actually quite good and may be second only to my Rakdos deck. K

I've been an author all of my life, I just didn't realize it until the Great Recession and I got laid off. With no job on the horizon and a need to keep myself engaged in something productive I began to seriously write. Oh, I've always written. I've written in secret. I've written fan fiction. I've written when I was too embarrassed to let anyone else, save my long-suffering sister see it. All that and it never occurred to me I was a writer until circumstances forced me to try my hand at self publishing. Sometimes it is funny how the universe has to show you what is right under your nose.
View all posts by K. L. Zolnoski →
Tagged Angel, Azorius, Deck building, Magic: The Gathering, Orzhov, Rakdos, Serra Angel. Bookmark the permalink.