Dragons of Tarkir Additions to some Decks 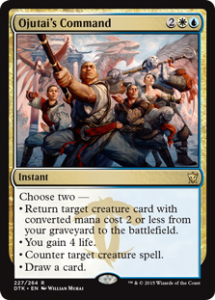 Those who follow Magic: The Gathering know that the new expansion set Dragons of Tarkir shipped last week. Personally I was excited to get my grubby little paws on this set because it promised a lot of dragons. Honestly, who doesn’t like a lot of dragons?

So I got my hands on a box and had an enjoyable evening opening packs and reading cards, looking at art and enjoying the scent of new magic cards. I noticed that the flavor text for Pacifism got changed, which is a real shame because I found the previous flavor text pretty funny.

The dragons are beautiful, each and every one spectacular and they have great powers too. I pulled so many amazing dragons that I’m seriously considering a 5 color singleton deck. Gotta play them all!

I have to say that even the commons are really good in this set. I was quite surprised by how good some of the commons are. I really, really wanted to get a white common named Resupply into one of my decks.

The following are the cards that did make it into decks and the decks they made it into.

In: Resupply
Tapestry of the Ages 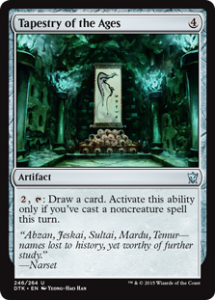 Tapestry of the Ages

I just couldn’t get anything into the Orizhov deck.

Dragons of Tarkir is a fantastic set. I’m sure there are more surprises in store than I’ve seen so far. K.

I've been an author all of my life, I just didn't realize it until the Great Recession and I got laid off. With no job on the horizon and a need to keep myself engaged in something productive I began to seriously write. Oh, I've always written. I've written in secret. I've written fan fiction. I've written when I was too embarrassed to let anyone else, save my long-suffering sister see it. All that and it never occurred to me I was a writer until circumstances forced me to try my hand at self publishing. Sometimes it is funny how the universe has to show you what is right under your nose.
View all posts by K. L. Zolnoski →
Tagged Azorious, Dimir, Dragons of Tarkir, Magic: The Gathering, Orizhov, Rakdos. Bookmark the permalink.