A Nerd In The Garden: The Rains Have Come 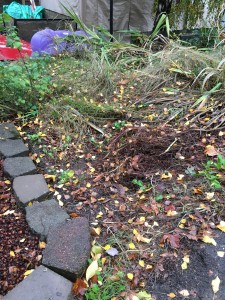 This week the rainy season got started in ernest. It began with a day of spritzing and grew slightly heavier each day until we have a steady all day rain falling. It might be tempting to think it’s time to put the gardening tools away and relax but now is the perfect time to weed out the large flower bed. The steady rains have made the soil soft enough to get the roots out with the weeds. Getting as many of the roots as possible will keep the return weed numbers way down. It also creates more room in the soil for the roots of the flowers planted in the bed.

Over the years the large flower bed has become overrun with weeds and grasses. I’m embarrassed to post pictures of it but in the interest of demonstrating the transformation, photos will be posted. 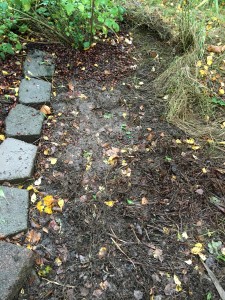 After weeding for the day

For weeding in the rain a good raincoat, work gloves and work boots are a good idea. I also use a tool that is a combination cat’s claw and hoe. With the ground wet a cardboard box, broken down makes for a good knee guard and after an area has been weeded it can be placed on the now bare ground to prevent grasses from growing back.

Last time I spoke of budgeting time as carefully as you budget money. Looking at the large flower bed, and honestly it is really just a strip on the side of the driveway that I’ve decided will be a flower bed, it would be easy to be overwhelmed by the enormity of the task. What does this have to do with budgeting time? Well when I first started the project I decided I could budget 2 hours of time each weekend to landscaping and gardening. Two hours is about all you’d want to spend out in the rain doing weeding even with a good raincoat and gloves. Two hours a week will be enough to chip away at the weeds and have the whole thing beautiful and ready to go by spring. 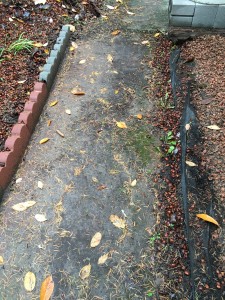 The border we installed last week is holding very well. The silt has not covered the stones we cleaned off from that side. In the photo silt has covered the other side where the border hasn’t yet been installed. When it isn’t raining so hard, or when I haven’t worked overtime we will install the other side.

I counted up the bricks left and we will need more to do the other side of the walkway. Fortunately purchasing a few at a time spreads the cost out and makes it more affordable.

There will be plenty to do in the garden and flower bed until the weather gets too bad to work in it. The raised beds still need to finish being winterized. That might be next week too. K.

I've been an author all of my life, I just didn't realize it until the Great Recession and I got laid off. With no job on the horizon and a need to keep myself engaged in something productive I began to seriously write. Oh, I've always written. I've written in secret. I've written fan fiction. I've written when I was too embarrassed to let anyone else, save my long-suffering sister see it. All that and it never occurred to me I was a writer until circumstances forced me to try my hand at self publishing. Sometimes it is funny how the universe has to show you what is right under your nose.
View all posts by K. L. Zolnoski →
Tagged Budget, Gardening, Landscaping, Rain, Winterizing. Bookmark the permalink.