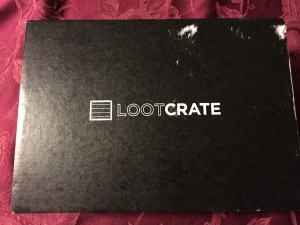 That’s right, I’m a looter. Of course I am. Last month was the time travel Loot Crate. This month a grab bag of goodies. If you want to get your own Loot Crate delivered each month you can go here.

Now this month we have a fabulous Mockingjay pin. 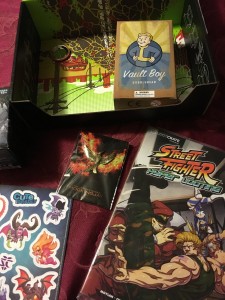 A Cute but Deadly mystery figure and magnet sheet which is pretty impressive.

The loot crate pin, catalogue and a Shredder Shades (of Teenage Mutant Ninja Turtles fame). Not quite as cool as the Doctors Sonic Shades but more evil. 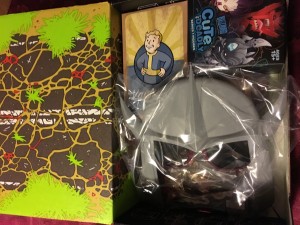 Shredder Shades in the Crate

Now, there is going to be a Pink Elephant gift exchange at work here soon and anything I have not wanted from any of my Loot Crates has been going in a box. It’s going to be awesome! And it’ll up the nerd quotient of one (or more) of my co-workers.

Oh! And there’s also an Anime Loot Crate if you like Anime.

I've been an author all of my life, I just didn't realize it until the Great Recession and I got laid off. With no job on the horizon and a need to keep myself engaged in something productive I began to seriously write. Oh, I've always written. I've written in secret. I've written fan fiction. I've written when I was too embarrassed to let anyone else, save my long-suffering sister see it. All that and it never occurred to me I was a writer until circumstances forced me to try my hand at self publishing. Sometimes it is funny how the universe has to show you what is right under your nose.
View all posts by K. L. Zolnoski →
Tagged gifts, Loot Crate, Mockingjay, Shredder, Street Fighter, Teenage Mutant Ninja Turtles, TMNT. Bookmark the permalink.