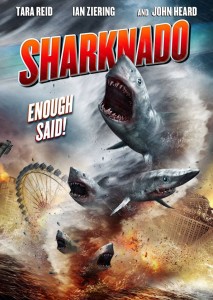 This review was originally published on The Geek Girl Project.

Sharknado is so over the top it’s actually charming. The people involved almost screwed up and made a good movie. It starts with the promised Sharknado. Yes, it actually does and they don’t save it for the end where we only get to see a brief glimpse. This movie doesn’t restrict itself to the Sharknado, we get waterspouts, a hurricane, flooding, exploding cars, and even nitro burning Humvee; oh yes. They are generous with the special effects. Sadly this includes the blood and guts but that’s thankfully not the only effect they have so it doesn’t overwhelm the rest of the movie.

The movie starts of, opening scene, with a waterspout sucking up a bunch of sharks that normally don’t school together but who am I to quibble about such a small detail. Then we cut to a fishing boat where they’re harvesting shark fins for a Japanese buyer. So now we have the setup: Airborne sharks who are angry.

This is a promising start for a creature feature. Then we cut to Santa Monica for some gratuitous T&A. Granted this is an unfortunate staple of the creature feature but Sharknado hits it once, checks it off the list and moves on. They hit all of the expected tropes of the creature feature and I get the feeling it’s more out of a sense of staying true to the genera than because they think this is how a movie should be made.

You would think sharks seeking vengeance for the harvesting of their fins (a barbaric practice as the fin alone is taken and the whole rest of the shark is thrown back into the ocean to die a slow painful death) would head to the country where their fins are a product. Then again filming in Japan is probably outside the budget plus they wouldn’t get to film the “California girls” in their skimpy swimsuits.

Anyway we meet our two main characters, Fin (Ian Ziering) and Nova (Cassie Scerbo). We also meet a surfing buddy of Fin’s who has an Australian accent plus an old washed up surfer named George (John Heard). The party is complete. Wait I spoke too soon. Oh and news stories about a hurricane that is battering Mexico are all over the airwaves. They keep the news stories going throughout the movie and it is a good way to keep the viewer up on plot points without having some guy standing around explaining everything.

The hurricane moves north and we get sharks eating surfers and swimmers, then tossed through windows and swimming in flooded streets. Fin has an ex-wife and daughter he’s worried about so the four load up in an SUV and head for Beverly Hills to check upon them. This would swell our party to 6 minimum, with a possibility of 7 if the ex-wife’s boyfriend is there. Everyone knows only two people ever make it out alive in one of these movies.

Off to LA we go where there are reports of sharks falling from the sky and swimming in the streets. Also these sharks are eating everyone they can. They’re coming up from the sewers and out of runoff pipes (yeah they’re big pipes). The sharks aren’t just swimming out of anyplace they can they’re being rocketed out like they’re being shot from a cannon. I dare say we are looking at high velocity sharks, also apparently jumping sharks.

I will have to say that the writers did a decent job with the characters. They’re pretty well written. I liked the heroes. I was sorry when octopus hands George got eaten. Fin puts his life on the line to rescue a bus full of children from death by shark despite his ex-wife urging him to just drive on and think about himself, even using her own daughter as leverage. She does not get eaten, although I confess I was rooting for the sharks when it came to this ex-wife.

It does beg the question, what’s he doing with rescue gear, mountain climbing equipment in his SUV but details, right? I will say that the flying sharks in Sharknado are n where near as fun as the ones in the Doctor Who Christmas Carol.

Sure you have to forgive a certain disregard for physics, marine biology and science in general to enjoy Sharknado but c’mon, you’re watching a movie called Sharknado. Also since Asylum does a lot of the original ScyFy movies I get to see the same actors in different roles. I kind of like this. I like seeing familiar faces in the movies. But I digress.

Surprisingly more than two people survive and the hero doesn’t get the girl. In fact a shark eats the girl. No I’m not giving everything away because some of the twists in this movie are just too fun. I have to say that the writers, the director, the actors and everyone involved really did their very best to slip up and make a good movie. There were unexpected surprises, a plethora of different ways for people to die, which is horrible but it’s a creature feature, and a ton of special effects. It had better editing than The Lone Ranger and was overall, for what it was, a better movie. Sharknado was a bit gory but fun. K.

I've been an author all of my life, I just didn't realize it until the Great Recession and I got laid off. With no job on the horizon and a need to keep myself engaged in something productive I began to seriously write. Oh, I've always written. I've written in secret. I've written fan fiction. I've written when I was too embarrassed to let anyone else, save my long-suffering sister see it. All that and it never occurred to me I was a writer until circumstances forced me to try my hand at self publishing. Sometimes it is funny how the universe has to show you what is right under your nose.
View all posts by K. L. Zolnoski →
Tagged Cassie Scerbo, Creature Feature, Ian Ziering, John Heard, Sharknado, Spoilers, The Lone Ranger. Bookmark the permalink.