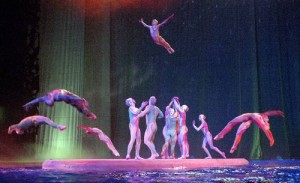 Yes I went to Las Vegas this last weekend. I flew in Friday afternoon and spent my first night in sin city taking a relaxing bubble bath and eating bon-bon’s in my room. It was heavenly. Because really, when do I get to do something like that at home? There are always eleventy-billion things I need to do when I’m home. Not that I’m complaining, mind you, that’s just the way things are.

Speaking of heavenly; we got VIP tickets to see Cirque Du Soleil “O” at the theater in the Bellagio Saturday night. Seeing Cirque Du Soleil is one of my ‘bucket list’ items so of course I couldn’t pass up the chance to see it.

I had no idea what I was getting myself into. Sure I knew it was acrobatics and fantastic costuming. But that’s like saying a Ferrari is wheels with an engine. The music is live just like the rest of the performance and they planted people in the audience to tell the story.

The costumes and choreography along with the vocals and music and the emoting of the dancers, acrobats and actors was so amazing, so purely beautiful that I was moved to tears more than once. Granted I’m a softie but this was so incredible, so beautiful it was as close to perfection as I can imagine anything being.

I use these words and they pale in comparison to what the experience was like. There is a nameless emotion that takes over when you are in the presence of a performance of such exquisite artistry that takes over and lifts you with it to a place of deep gratitude for being permitted to witness it. The last time I was moved by a performance like this was when Anissina and Peizerat were skating for the Olympics.

Cirque du Soleil has 7 shows in Las Vegas, I believe. We saw the “O” show which involved a lot of water. The genius behind it is evident in every motion of the acrobats, dancers and everyone involved. The costuming is out of this world and even though there are very few spoken lines, the characters come to life through the motions and expressions of the actors and actresses.

The amazing things they did with dance, the acrobatics and the contortionists were breathtaking. Every motion pushed the boundaries of what a human being could do, without ever sacrificing the beauty of it. I saw the most astounding examples of angular momentum, vector addition and parabolic trajectories I’ve ever seen. There is a purity to what they do that I cannot overstate. It is a purity of beauty, of art, of physics, of the human form, of music and dance that defies my grasp of language.

I am so happy that I got to see it. Given half a chance I would see Cirque du Soleil again. I’ll have to write a post about my personal “bucket list” since I’ve been slowly checking things off of it as the opportunity arises. If you get the chance, and you are at all interested in the performance arts, do see Cirque du Soleil. K.

I've been an author all of my life, I just didn't realize it until the Great Recession and I got laid off. With no job on the horizon and a need to keep myself engaged in something productive I began to seriously write. Oh, I've always written. I've written in secret. I've written fan fiction. I've written when I was too embarrassed to let anyone else, save my long-suffering sister see it. All that and it never occurred to me I was a writer until circumstances forced me to try my hand at self publishing. Sometimes it is funny how the universe has to show you what is right under your nose.
View all posts by K. L. Zolnoski →
Tagged Acrobat, Anissina, Cirque du Soleil, Las Vegas, O, Peizerat. Bookmark the permalink.