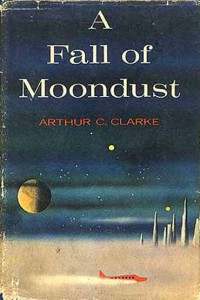 A Fall of Moondust

A lot has been written about Sir Arthur C. Clarke (he was knighted in May of 2000). He wrote 2001 A Space Odyssey, which grew out of his short story The Sentinel. I also read Rendezvous with Rama. Fortunately I did not read those books first. I found everything to do with the Rama mythos and novels boring, over done and just dry as can be. Sacrilege I know but they are just not to my taste. And clearly Sir Arthur C. Clarke loves the idea because he wrote several incarnations of it.

The first novel I read of Sir Arthur C. Clarke’s was A Fall of Moondust. I found it absolutely fascinating. The descriptions of the moondust and its effects on the mechanical apparatus of the vehicles were superb. The characterizations were a bit weak but still, I was young and it was the first of his novels I’d read.

Because I found A Fall of Moondust so much to my liking I went searching for anything else of his I could get my grubby little hands on. I read The City and The Stars and The Deep Range. I loved many of his short stories: The 9 Billion Names of God, A Meeting With Medusa and The Star all captured my imagination and made me think about things.

I recently bought and read Richter 10 by Sir Arthur C. Clarke and Mike McQuay and while there were moments of brilliance, I found it just overwrought with murky characters who were at best disagreeable and at worst completely sociopathic. There were places in that book where I could actually tell what Clarke had written because the style was his style. It was a good idea that got too caught up in intrigue and clever characters that dragged the story down and made it a slog to get through. So much time was spent setting up these awful characters that the ending was anticlimactic. Not enough time was spent on the science fiction part.

What was supposed to be a paradigm shift in the reader’s idea of what it means to be human, of what life and death are, falls flat because very little time is spent in the story even mentioning this very important aspect of the plot. Instead too much time spent on introducing and developing these ugly characters so the reader is left with a bad taste in their mental mouth about characters possibly cheating death, rather than what it means to be human and to be alive.

I, personally, find that I like the earlier, hard science fiction that Clarke wrote. I didn’t and still don’t much care for the later stuff that gave rise to and became 2001. I feel that Clarke’s work is strongest when he is working with the science fiction, the speculative fiction of his stories. He postulated the proper orbits for the communications satellites. The geosynchronous orbit that our modern technological civilization relies on is named after him: It’s called the Clarke belt. This man was and could still be a true visionary. 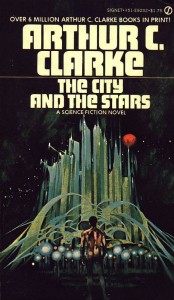 The City and The Stars

This is not to say that he doesn’t have anything to say about things like religion and politics. The short story The Star is very thought provoking. But he shouldn’t let that part of the story run away with the entire work. He is strongest in his craft when he maintains a balance between how deeply he delves into his characters and how clearly he presents the science fiction. K.

I've been an author all of my life, I just didn't realize it until the Great Recession and I got laid off. With no job on the horizon and a need to keep myself engaged in something productive I began to seriously write. Oh, I've always written. I've written in secret. I've written fan fiction. I've written when I was too embarrassed to let anyone else, save my long-suffering sister see it. All that and it never occurred to me I was a writer until circumstances forced me to try my hand at self publishing. Sometimes it is funny how the universe has to show you what is right under your nose.
View all posts by K. L. Zolnoski →
Tagged A Fall of Moondust, Arthur C. Clarke, Golden Age, Richter 10, Science Fiction, The City and The Stars. Bookmark the permalink.