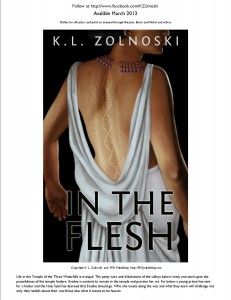 Mankind’s ancient curse has ravaged the world and even crept to the very doorstep of The Temple of The Three Waterfalls. Generations-old treaties have spared the temple and those who call it home. Evadne, only daughter of the Holy Sybil, is content to remain hidden away in the remote mountain temple and study her craft.

But things are changing in the outside world. The emissary of a foreign prince has been sent to take Evadne away. Whispers of strange prophecies are heard from behind thick stone walls and the rumor of a powerful oracle to the east has the temple soothsayers involved. Change is on the wind.

Far away from the temple two brothers have discovered a lost continent. The promise of long lost technologies and treasures has the prince racing to stake his claim. They are not unopposed, for there are those who fear this discovery will bring about the end of the world.

In The Flesh on Amazon Kobo