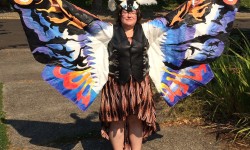 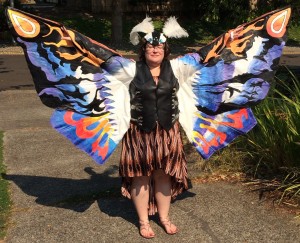 The wonderful people at Kaijucast posted a picture of the Mothra cosplay on their web site. If you love Kaiju you should really check them out. Their panel discussion at the Rose City Comic Con was so much fun.

I haven’t had a chance to catch up on all of their podcasts yet but they are the fine folks who suggested Daimajin to me and I really enjoyed those movies. 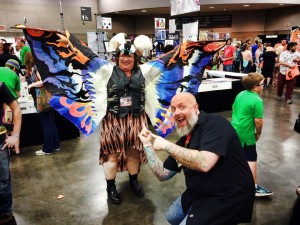 Kyle of Kaijucast with Mothra

As a huge Godzilla fan (you might have noticed) I checked out Gareth Edwards short independent film Monsters while waiting for Godzilla to get released on DVD. While the film showed clear indications of potential greatness, it never quite delivered on its promise. As a first film it was brilliant. As a movie, not so much. Gareeth Edwards ideas about women were questionable at best but there were scenes and suggestions of what might be that were just breathtaking.

When I heard that, due to the success of Godzilla, Gareth Edwards was going to turn Monsters into a trilogy I was less than enthusiastic. And yet, I am willing to give thin and the movies a chance. Godzilla was very good. Sure the human characters weren’t the best and the story wasn’t anything that will change your life, but it was a solid, entertaining and well done movie. There were scenes on Godzilla that were spectacular. One of my favorite was the one where you see the huge traffic jam with the plain down in the middle of it. Another is at the airport in Hawaii and the leading edge of the Tsunami heralds Godzilla’s approach. It’s brilliant touches like that that I saw the potential for in Monsters. You can just tell that Gareth Edwards knows how to put together a scene that will have impact and make an impression. The shot of the male MUTO diving into San Francisco bay after that boat is just spectacular, brilliant and the way the movie almost goes black and white in spots gives it that war-time feel that the original Godzilla was after.

I think as Gareth Edwards grows as a director the flaws will get ironed out and he won’t make rookie mistakes like in Monsters having a woman who is unaccountably unhappy to be going home to her wealthy fiancee but the man who is interested in her not having the depth of character or human decency to ask her about it before displaying clear interest in her. Then again if a guy who had professed interest in me, in any way, had lost my passport to a one night stand he just couldn’t do without, I wouldn’t be quite so forgiving. Just sayin’.

Those are the kinds of things that get in the way of a good movie. Just ask Kevin Costner. If people don’t like any of the characters, or have no reason to care about them (Water World) they won’t enjoy the movie.

With all that being said, I love giant monster movies. I love Kaiju. So despite the fact that I didn’t much care for Monsters, I could see moments of brilliance and the promise of a great director in it and I am kind of starting to look forward to Monsters: The Dark Continent. K