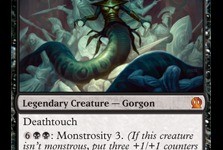 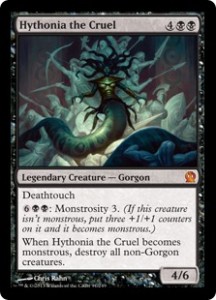 Everyone has their own, unique, process for building a deck when it comes to Magic. Even people who build competitive, tournament decks have their own approach, that is part of the beauty of the game, that it taps into creativity on the part of the players. This also causes people to become attached to their decks. They built them, they play them, it’s something they are invested in.

I’m sharing three decks that I’ve put together that are moderately successful. I thought it would be useful, possibly even helpful to see my process for building a deck. Now I like to build Johnny decks not Spike decks and it’s kind of messy since I’m not in a super hurry to get it done.

First I pick a theme or find a card I want to play. For my Dimir deck (black and blue), I stumbled across a Hythonia the Cruel and loved the picture. Upon reading the card I realized that I couldn’t just throw her into my Rakdos deck because her Monstrous form destroys all non-Gorgon creatures. This, naturally, meant that I was now committed to building a deck around Gorgons. I also had a Morkrut Banshee I couldn’t wedge into my Rakdos deck and I really think it’s a good card. So I’ll put it with my Hythonia the Cruel and see what I can do with them. 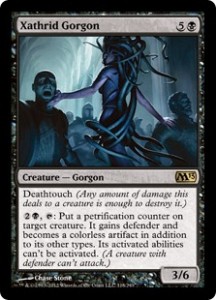 Once I have the seed of a deck, like the above two cards, I begin to choose cards that I like, that I think might work or that seem cool and throw them into a deck case. Editing will come later. I tend to throw a bunch of cards together if I like them or think I want to play them and then have to edit later. It’s far easier to cut a deck down than try to find that one perfect card. Also, if you get a deck together that functions you can play it until you stumble across that perfect card.

There aren’t really enough Gorgons to make a full deck with just them so I’m thinking Gorgons and Zombies. This means I need to find some kind of graveyard recursion. Zombies call for it by nature. I wouldn’t be being true to the spirit of the creature if I neglected graveyard recursion. The question is what? Also I think a Skullclamp is called for.

32 cards so far and I still don’t know quite what this deck does. To make it work I have to know what it does—besides win, silly. I need to know how it is going to win. I need to pick a focus for it like my Orzhov deck has and my Rakdos deck. 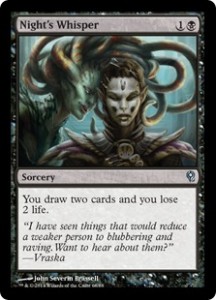 From what the cards already do there is a lot of removal. That may be the way to go. A little more control from the blue and that could get my Gorgons and Zombies through their defensive line.

Figure 24 land to start with in an average deck with a relatively undemanding mana curve, that leaves me with 4 more cards I can easily fit into the deck and keep it at 60 cards. I’ll have to see what I find. This is the beginning of my Dimir deck. I will keep you updated as I complete it and how it plays in game play. K