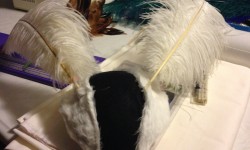 If you’ve been following my humble blog, gentle reader, you know that I enjoy going to comic cons. I also have a cobbled together steampunk cosplay that I wear. You also know that I am a huge Godzilla fan. As a result of these things I have decided to try my hand at a Mothra cosplay.

There were several things I considered before deciding how to go about my cosplay. I didn’t want to go with a full face mask. That would be too hot and involve way too much construction. I also didn’t want to limit my visual field with a bulky mask. Wings are also a logistical nightmare at a con where there are hundreds if not thousands of people all together enjoying the geek-fest.

I sat in on a couple of cosplay panel discussions at the last couple of cons and got some really good pointers. Like thinking about how you’re going to sit in a car with your costume on, or how you are going to use the restroom. These are good things to keep in mind.

So with those constraints, along with a rather limited budget, I began trying to puzzle out how I could make this work. It occurred to me that I could go a minimalist route and possibly make something that would adhere to the spirit of Mothra and cosplay without being a full body suit topped with a huge heavy mask. Then it came to me: I could make a hat. Now I’ve never made a hat before but I know they have fascinator forms at craft and fabric stores where they sell bridal supplies. (Also I don’t know what delineates a hat from a fascinator so forgive me if I’m using incorrect terminology. This could be an elaborate fascinator for all I know.)

I looked at my Mothra figure and got some white faux fur, a scrap or two of black felt, two ostrich feathers and since I couldn’t find blue gems in the size and shape I wanted I bought two pendants that had plastic gems that were close. 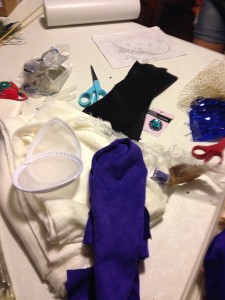 I also had some royal purple scraps but they did not fit with the theme. I’ll save those for another project. This is what I started out with. I got two fascinator forms because neither was the size or shape I wanted. I hand stitched the two together and used a couple pieces of scrap fusable interfacing that I pulled off the back of the remnants of another project to complete the size and shape I wanted. 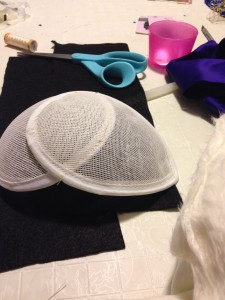 Over the top of what is now the superstructure for the headpiece I pinned a strip of black felt and two pieces of the white faux fur. To cut down on weight I hand stitched all of this together. 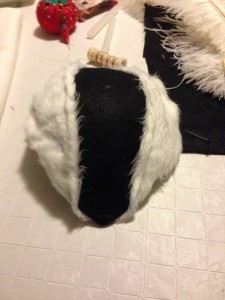 Now I could have gotten a bunch of ostrich feathers cheap on eBay but I only needed two. I had to balance my need to watch my budget with my limited space and against the likelihood of needing white ostrich feathers in the future. I spent a bit more than I needed to but I only got two ostrich feathers. These are very light weight and the perfect size and shape to make Mothra’s antenna. I used an exact-o knife to cut through the forms as well as cutting a slit in the fabric overlay so that I could hot glue the feathers into place. I stuck them just slightly through the fascinator superstructure and used liberal amounts of hot glue to hold them in place, both underneath and on top. Then I laid the fabric back over the top and stitched it down. The hat/fascinator is remarkably lightweight and well balanced since the antenna lay at just a bare 15 to 20 degree angle off the hat. 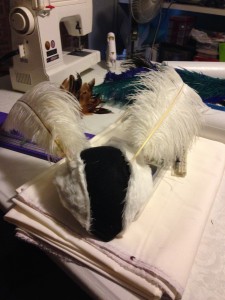 Next time I’ll get the plastic gems off the pendants and hot glued on the headpiece. 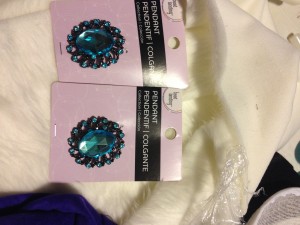 These will do just fine for eyes.

I have some ideas for how to make workable wings too, by workable I mean the kind you can wear to a comic con without requiring a lot of airspace. I’m using the term wings loosely here. I will keep you updated, gentle reader. K.