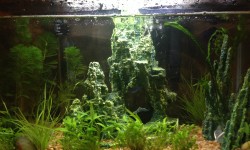 Well, gentle reader, despite Seattle throwing away the Superbowl with that last play 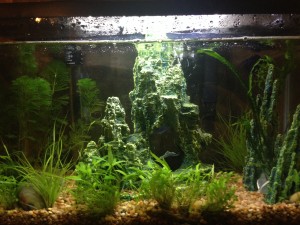 call, I got a lot done tonight. I got a chapter of new content written for The Shadow of the Hand of God and I’ve written and pre-scheduled the next four posts for the little blog here. One for each Saturday in February. Three about Magic: The Gathering and one about my Betta and the sadness of a lost snail. So the good news is that there will be blogs and maybe some extra ones as topics suggest themselves to me.

I’m really getting excited about the re-write of The Shadow of the Hand of God. I think it will be better, more accessible and more interesting. As I get closer to having it completed I’ll post some of the new content. K.

Today I will share with you, gentle reader, a brief glimpse into the trials and tribulations of a self published author.

Well I took the plunge and contacted, via their web page, KBOO here in Portland to see if they might have some time to fill with an unknown local author.  I’m very nervous about it.  I know that’s silly and yet here I am.    I was only going to mention my upcoming novel In The Flesh, but a friend suggested that The Shadow of The Hand of God was very timely and they might be interested in that too. So I checked out their FAQ to see about how to contact them and did so.

Then I discovered a huge GLARING error in the description for The Shadow of The Hand of God on Amazon and had to fix it.  Funny that my Kindle account had it correct.  Turns out Createspace, whom I specifically and deliberately instructed not to update to Kindle, overwrote my Kindle account.  Swine.  They did it after I’d had several other people double check the upload on Amazon from my Kindle account.  So I don’t know when the error crept in but I was utterly mortified and spent a good part of the day working to fix it.

Ok so that’s a bit of the down side which, really isn’t all that Earth shattering in the grand scheme of things.  I was still pretty stressed and embarrassed all day.  Moving on to better things:  I was actually in bed, all cozy and just about ready to close my eyes when I suddenly had an idea, nay not a single idea but verily a whole swarm of ideas for a prequel to In The Flesh.  So what could I do but get my iPad and jot them down?  And then–then I had an idea for what exactly is the issue in the sequel and a name change for the working title from Lorelei to The Ancient War.

Oh I’d had a vague idea of what was going to happen in the sequel and have even jotted down a very rough outline.  But last night was an idea bonanza.  They just kept coming.  I know the name of the issue.  I know how to start the book and I know what I want some of the characters to do.  It was a busy bit of sleep deprivation.

The long and the short of this being that what I started out to write as one book does indeed look like a trilogy now.  I will be busy for the foreseeable future.  And I promised myself I’d let myself write a space opera.  I guess it’s going to have to wait now.  Hopefully not too long because I really want to write one.

As always, I hope you enjoy reading, as much if not more, than I enjoy writing.  K.

I paid for my cover art last night and posted the banner ad the artist made for me to go along with it.  I also updated the about section of this page to have a very brief synopsis of the story.  This is so exciting.

Originally it was my intention to publish, self publish that is, In The Flesh as an eBook only.  The thing is I’ve now had two people ask me about physical copies.  One of my beta readers asked how she was supposed to get a signed copy if it was an eBook only.  That being said, and with the feedback I’ve gotten I think it would be worthwhile to make In The Flesh available for print on demand also.

When I self published The Shadow of The Hand of God I looked into publishing through Smashwords which would have made it available in many more venues than just Amazon.com.  I chose not to because it would have required stripping all of the formatting out of the book and that book is organized into discrete sections for a reason.  In The Flesh does not have that issue so I am once again considering going through Smashwords to make it available in iTunes and Kobo and many other eReader formats.

For the record, both books are very different.  The Shadow of The Hand of God is a memoir and a ringing condemnation of fundamentalism and what far right conservatism has become.  It is a cry out to everyone who has felt rejected by the modern church and a heartfelt assurance that you are not alone and not unloved.

Once I have editing done for In The Flesh I will work on a synopsis and pitch for the back cover and to use in any advertising I might do.  There is still quite a bit of finishing up for In The Flesh but I hope to have it fully ready to publish and available for purchase in March of this year.

For those who are wondering how tedious editing is—I’m going to go do the dishes.

That’s right, here it is for you to enjoy.  My write up on Bookmatchers.com  http://www.bookmatchers.com/the-shadow-of-the-hand-of-god-by-k-zolnoski/

The webmaster over there, Steve is fantastic.  If you are an author go register your book there.  If you are a reader, go find the books you like.

A week ago my laptop stopped displaying any visual content.  This was a bit of a panic situation as the entirety of my upcoming novel In The Flesh is on that machine.  The excellent people at Laptop Repair could not repair my machine for less than the cost of a new one but they were able to recover all of the data.  Yay!  So a week to get through all of that, get my data back and load it back into my software and we’re back on track although a bit delayed.

Now through tomorrow my first book the non-fiction memoir The Shadow of The Hand of God is being featured over at http://mad-gods.com/blog/?p=2274  Be sure to check them out.  They’re featuring indi authors all month and next.

Also the site I was talking about a month or so ago just went live http://www.bookmatchers.com/  So be sure to check them out too.